Most cases of head asymmetry develop after birth becoming apparent to the parents or to a health care professional between four to eight weeks of age. The head asymmetry typically affects one side of the occipital bone or the back of the head.

The issue of head asymmetry has become more common as a result of the baby on the back program to reduce the incidence of SIDS. 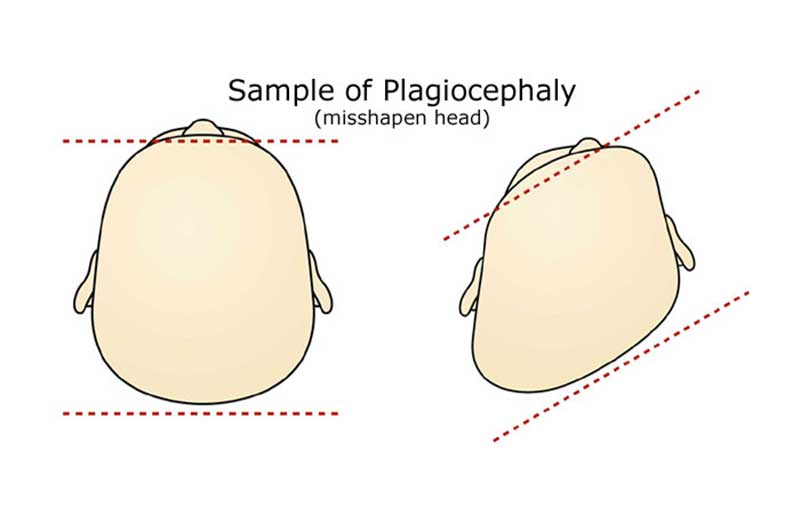 Our clinical experience at Chiropractic Children’s Healthcare indicates that most of the cases we see with occipital plagiocephaly have dysfunction affecting the upper cervical spine. Chiropractors specialise in and are specifically trained to correct this type of issue when it affects the cervical spine.

What is the long term effect of plagiocephaly or head asymmetry?

Prior to the year 2000 the general opinion within the medical community was that there were no long term issues with head asymmetry as it was just cosmetic. This belief was shown to be incorrect as a result of research published in 2000, which found that 39.7% of the children with persistent deformational plagiocephaly had received special help in primary school. Only 7.7% of siblings required similar help. Problems noted related to subtle problems of cerebral dysfunction that were manifest during the school age years involving language disorders, learning disability and attention deficits.(1) This was confirmed by in 2007 by research which reported that 33% of the cases diagnosed with deformational Plagiocephaly in infancy went on to need learning assistance with 14% in special class. Long term outcomes were no different between with or without helmet use.(3)

In 2002, research found that most of the infants with Plagiocephaly had impaired central sound processing and have an elevated risk of auditory processing disorders.(4) Then in 2005, research found that 35% of infants with deformational plagiocephaly had altered visual field development.(5) Unfortunately many are unaware of this research and continue to regard occipital plagiocephaly as a cosmetic issue requiring no treatment or management.

Paediatric Chiropractors understand the importance of restoring normal spine function as early as possible to permit normal head shape development as well as normal brain development in order to prevent or reduce later issues such as learning difficulties and attention deficits.

What is the short term effect of plagiocephaly or head asymmetry?

In 2001, research was published which this time looked at the short term effects of head asymmetry(6). The group with plagiocephaly were tested at an average age of 8 months, 0% of the subjects in the plagiocephaly group were accelerated, 67% were normal, 20% had mild delay and 13% had significant delay. This study indicates that before any intervention, babies with plagiocephaly demonstrate delays in cognitive and psychomotor development by an average of 8 months of age. This was confirmed in 2009 by research looking at 287 infants with deformational Plagiocephaly and found that 36% showed developmental delay.(7)

We can see from this research that occipital plagiocephaly is associated with cognitive and psychomotor developmental delays in 33% of babies by 8 months of age and that this can persist resulting in 39.7% of children with persistent occipital plagiocephaly going on to experience learning difficulties and attention deficits when attending primary school.

Helmet use improves the head shape of babies with plagiocephaly and helmet therapy is being used up to 18 months of age with the best result obtained prior to 12 months of age. However, the research has indicated that the use of helmets did not alter the long term issue with learning difficulties: about 40% of the helmet group later experiencing learning difficulties which was the same percentage as the untreated group.(1) Using helmets on their own will improve the head shape but will not alter the associated problem of brain development in babies with plagiocephaly.

Chiropractors understand that it is important to restore normal cervical spine function to permit normal brain development in babies with occipital plagiocephaly.

Development and growth of our brain and nervous system is dependent on sensory input; the technical term for this is afferentation. We get our sensory input from our eyes, ears, taste, touch and proprioception. Proprioception is all the information and messages going to the brain from the joints, muscles and ligaments. Proprioception provides a massive and continuous barrage of messages into the brain via the spinal cord. 90% of the total sensory input to the brain comes from the spine and associated structures; especially the upper cervical spine which has the greatest density of nerve receptors in the spine.

Clinically the best results regarding improved head shape and normal proprioception are obtained with treatment and correction of any abnormal cervical spine function prior to six months of age. However, improvement can be obtained at any age.

How is plagiocephaly managed?

The first and most important aspect of correcting head asymmetry is to restore normal cervical spine function. This is best achieved by chiropractors. Once normal cervical spine function has been restored positional management, where the baby’s head is turned to the non-flat side whilst asleep, can then be more effective. If the cervical spine issue is not resolved then positional management is less effective. If there is involvement of the neck muscle (such as a sternocleidomastoid tumor) then stretching exercises will need to be part of the program of care. The stretching exercises will be provided by your Chiropractor. It is important to resolve any issue regarding muscle contracture as early as possible to minimize the possibility of later need for surgical correction of the muscle issue.

We wish to acknowledge the source of this information is from Dr Braden Keil, Chiropractor, chirochildhealth.com.au